SpaceX has launched a new web-based booking tool for its rideshare Falcon 9 launches, a service it announced last year to expand its addressable market to include small satellite customers who don’t have the budget or need to book a full rocket, which can cost upwards of $60 million. Prices for the rideshare services that SpaceX is offering through the website start at $1 million for payloads ranging up to 200 kg (440 lbs), with additional weight adding $5 per kg to the cost.

The selection tool asks you to specify the desired orbit (Sun synchronous, low Earth or polar) and your minimum readiness date (the earliest your payload can possibly fly), with dates starting this June as of this writing. You then input the total mass of what you want to fly and get an estimated cost. Proceeding brings you to a series of screens where you select whether you’ll need either a 15-inch or 24-inch port on the launch vehicle (which is largely a function of volume and mass), as well as the specific rocket you’re looking to book a ride on (from upcoming scheduled missions).

Other options include add-ons like port adapters to meet the standard sizes that SpaceX uses, as well as a SpaceX-provided separation system in case you don’t have your own, along with options for on-site fueling if your spacecraft has its own propulsion system, and insurance for up to $2 million in value. It’s a little bit like configuring a car through Tesla’s configurator — but for launching something into space.

This isn’t just a lead-generation form, either; once you’ve selected all your options, and confirmed that you’re not subject to any actions or International Traffic in Arms (ITAR) restrictions imposed by the U.S. government, you can put in a credit card number to instantly pay $5,000 as a deposit, with three installments due thereafter to make up whatever your total is, including the largest one due within five days of SpaceX confirming acceptance of your request. 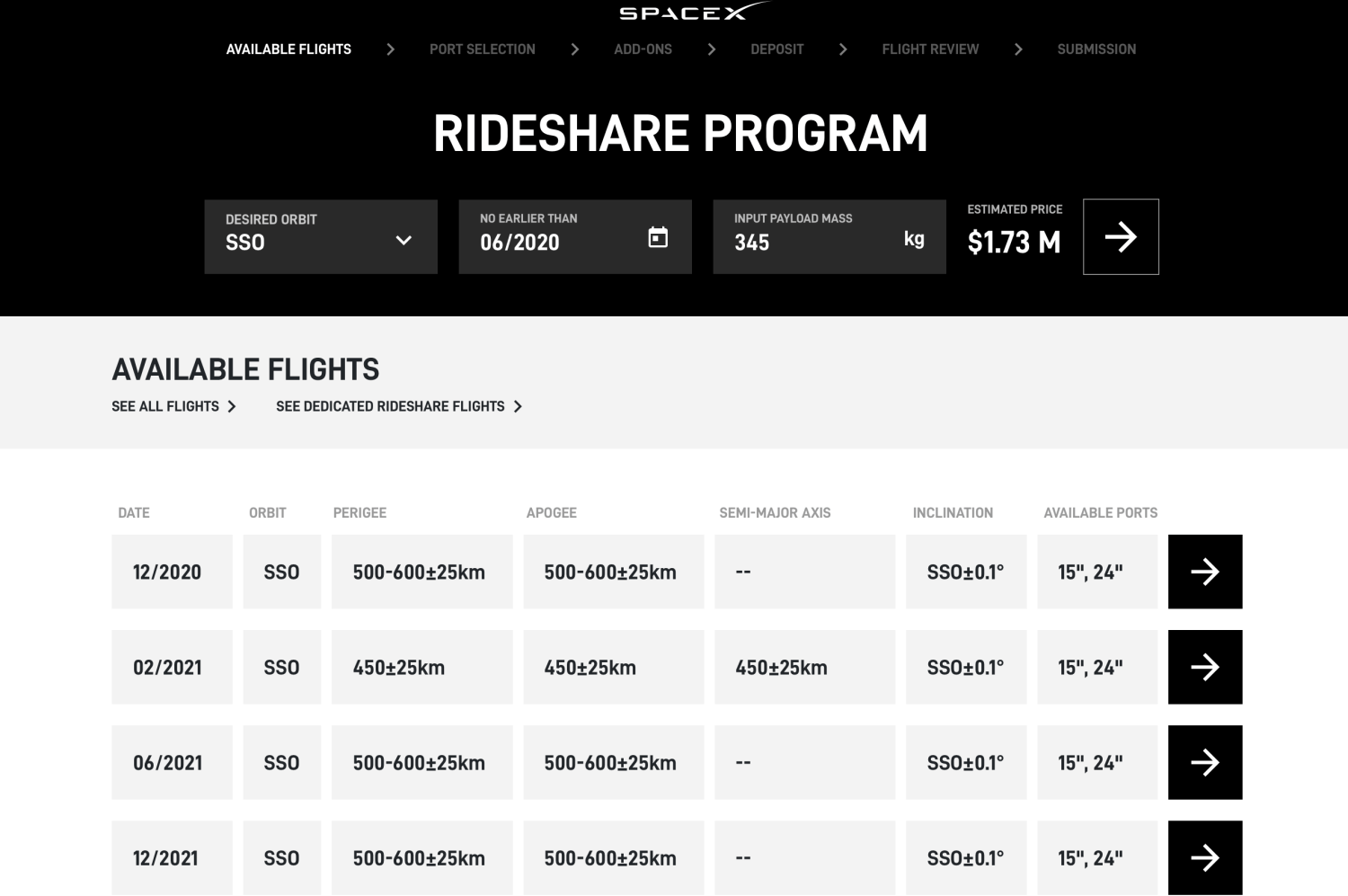 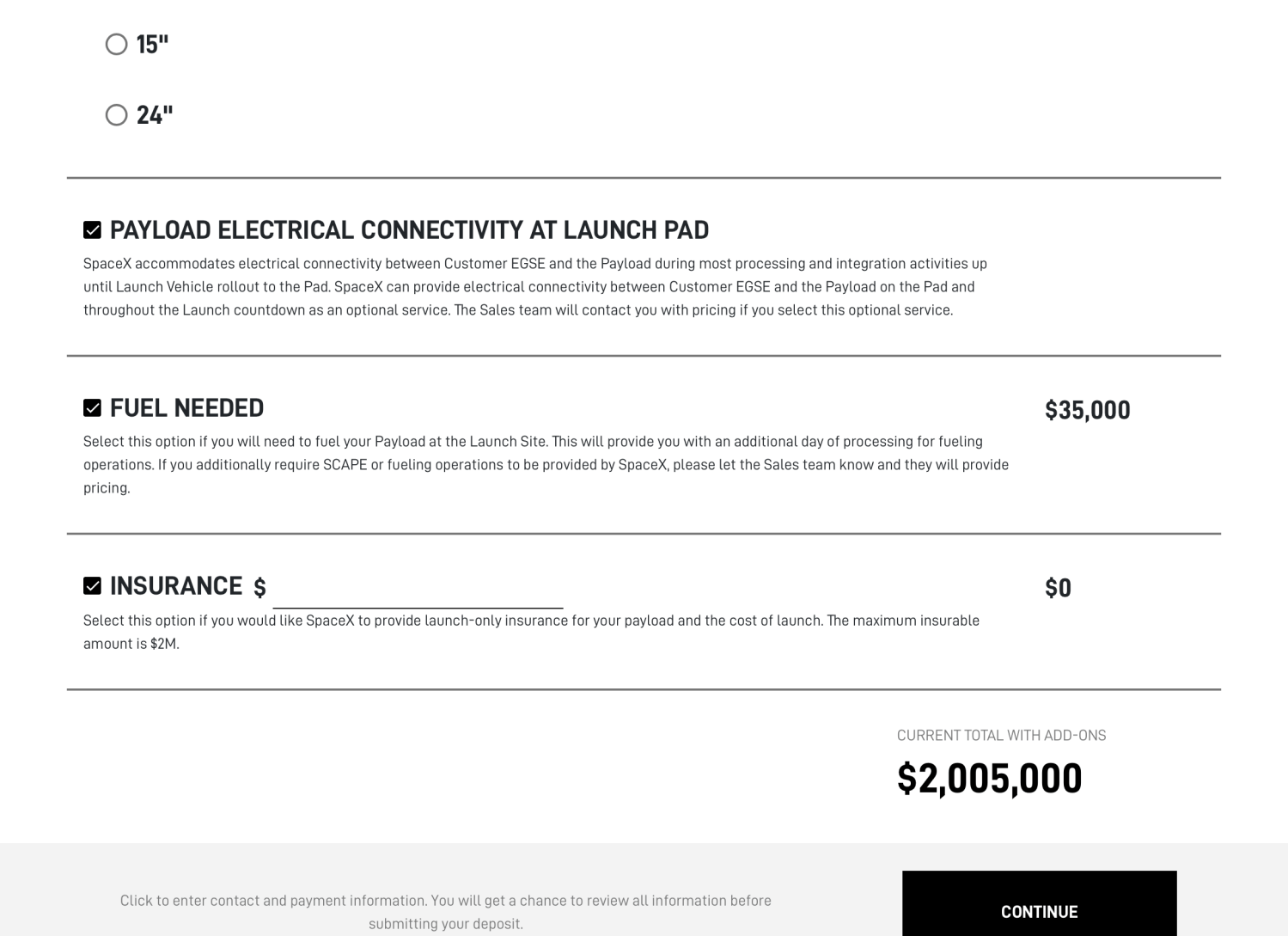 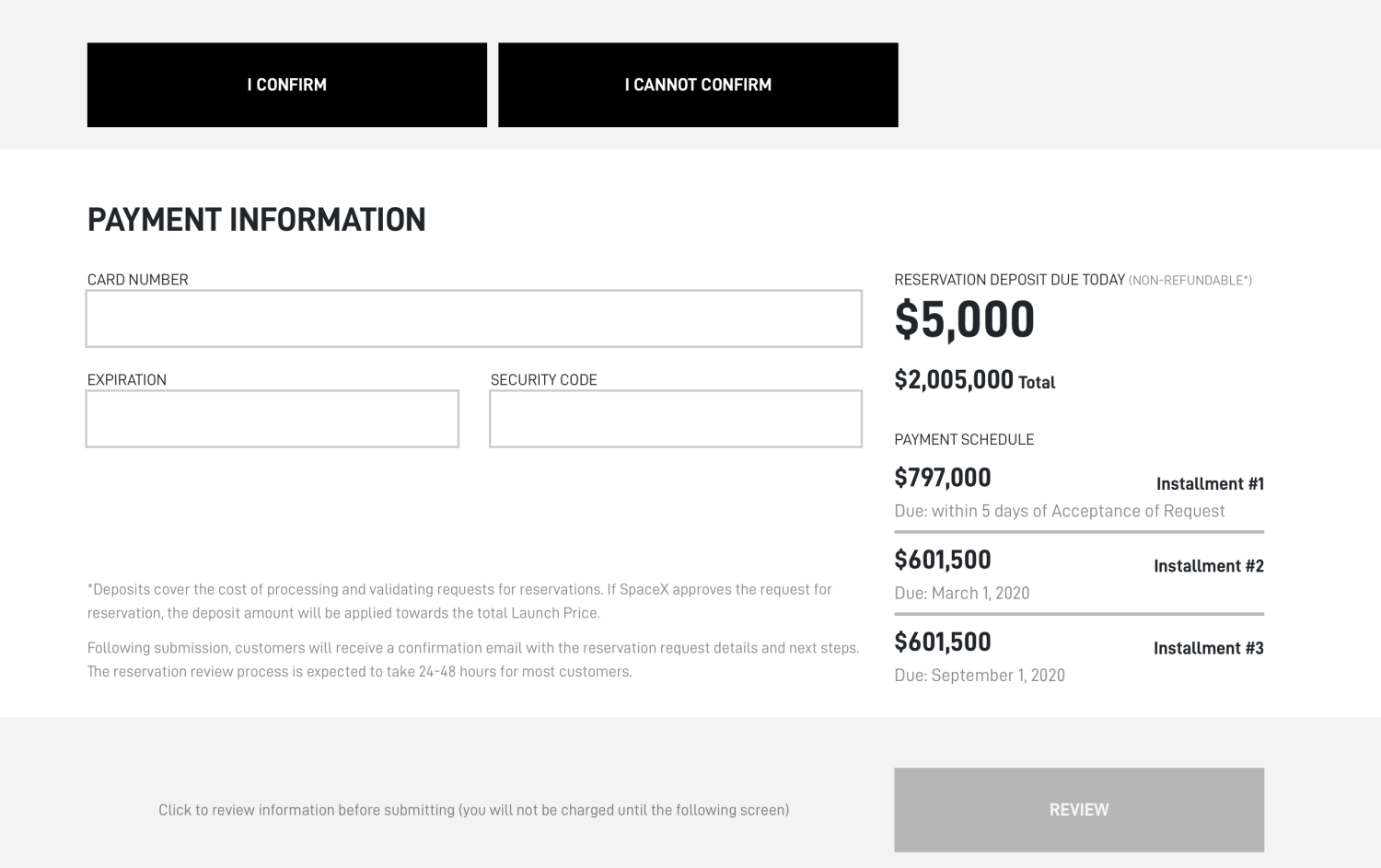 SpaceX has also published an accompanying Rideshare User’s Guide that goes into a lot more detail about the program, including technical requirements, details about things like environmental testing, legal considerations and much more. But it’s still amazing that I could, in theory, have just put up a down payment to send something to space as easily as I could reserve a Tesla Model Y.

Of course, I would forfeit that deposit because I don’t have the slightest clue about getting anything to space from a regulatory perspective, or the minimum $995,000 required to pay the balance for even the smallest payload without any additional frills. But if you do know what you’re doing, there’s now no easier way to book an orbital flight.